The dollar rises against the yen as sentiment picks up further

The foreign exchange markets seem to be entering a phase of consolidation for the moment. The yen is trading largely lower as European indices and US futures rebound further. The Canadian dollar is the strongest with WTI crude oil recovering 68 handfuls. The Aussie and the British pound follow as the next strongest of the day. But after all, there isn’t much of a change in the weekly picture as the dollar and yen are still the strongest while commodity currencies are the weakest.

Technically, the strong rebound in the USD / JPY is worth noting. The eyes are now on resistance 110.33. The breakout there will argue that the corrective drop from 111.65 ended at 109.05. A larger rise would then be seen to retest a high of 111.65. At the same time, gold is back under the handle 1800, with the eyes on the support 1791.45. The breakout will indicate the completion of the rebound from 1750.49 and bring a further test of that support. The two developments, if they occur together, could indicate a stronger rally in the dollar elsewhere.

Gold Comes Back Below 1800, But Still In The Range 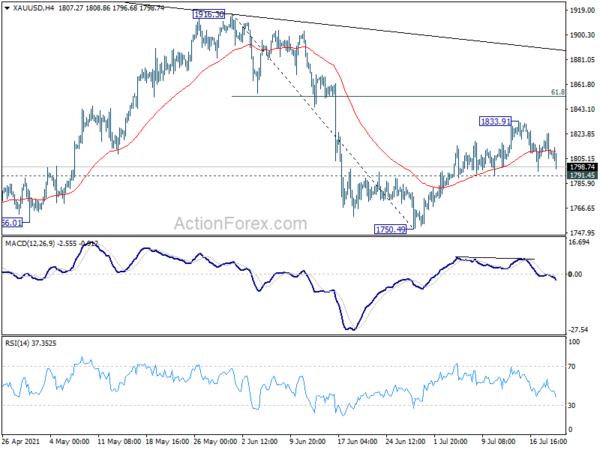 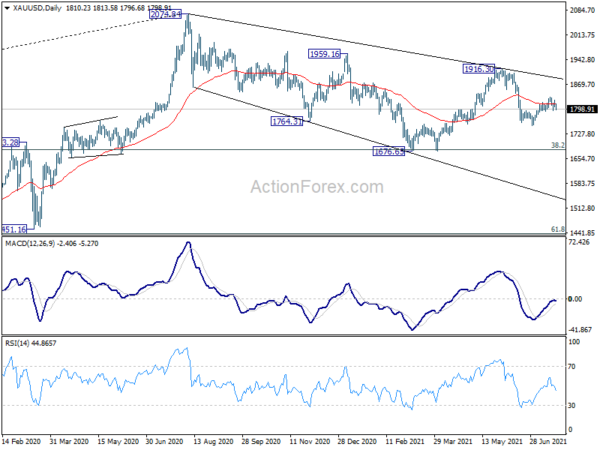 BoJ Deputy Governor Amamiya Masayoshi said in his speech that an upward trend in private consumption should “become evident” as the impact of COVID-19 gradually declines and employee incomes increase. ”The“ virtuous circle ”in the“ business sector ”will extend to the“ household sector ”and“ intensify the cycle throughout the economy. ”Nonetheless, the baseline scenario contains“ high uncertainties ” With risks “biased downwards” on the spread of variants. But activity could improve more than expected as the deployment of the vaccine accelerates.

Masayoshi also said that it will take “time” to reach the price stability target of 2% inflation. He added: “While the inflation rate has clearly increased lately in the United States and other countries, it has been slow in Japan.” In view of this, “there is a need for the Bank to persistently continue to conduct strong monetary easing in order to achieve the objective of price stability.”

Exports from Japan increased 48.6% yoy to JPY 7220B in June. This is the fourth consecutive month of double-digit growth, although it is vastly exaggerated by last year’s pandemic plunge. By destination, exports to China jumped 27.7% year-on-year, driven by demand for chip manufacturing equipment, raw materials and plastics. Exports to the United States also increased 85.5% year-on-year, driven by cars, auto parts and engines. Imports increased 32.7% year-on-year to JPY 6837B. The trade surplus stood at JPY 383 billion.

Retail sales in Australia fell -1.8% month-on-month in June following the return of restrictions

Ben James, director of quarterly economic surveys, said: “The drop in revenue in June is due to the impact of coronavirus restrictions in several states. Victoria experienced restrictions from the start of the month, which were gradually eased from June 11. New South Wales, particularly Greater Sydney, saw stay-at-home orders issued towards the end of the month. Other states and territories have seen their trade halted due to mini-locks, as well as reduced mobility between states with tighter border restrictions. “

Australia Westpac leading index fell to 1.34, RBA to use flexibility in asset purchases

The Australia Westpac leading index slowed from 1.68% to 1.34% in June. The index peaked at 5% in November of last year, then gradually fell back. It is still comfortably above zero and signals above-trend growth prospects. Still, Westpac expected a contraction of -3.1% of GDP in the third quarter in New South Wales and -0.1% in Victoria due to the resumption of lockdowns.

Westpac added that RBA would be informed of significant downward revisions to third-quarter growth at the August 3 meeting. At least he could announce the postponement of tapering from AUD 5 billion to AUD 4 billion per week, which is expected to start in September. In addition, “a decision to immediately increase purchases to $ 6 billion per week would certainly send the right signal that the Bank is responsive to economic developments and is ready to use its new flexible policy tool accordingly.” 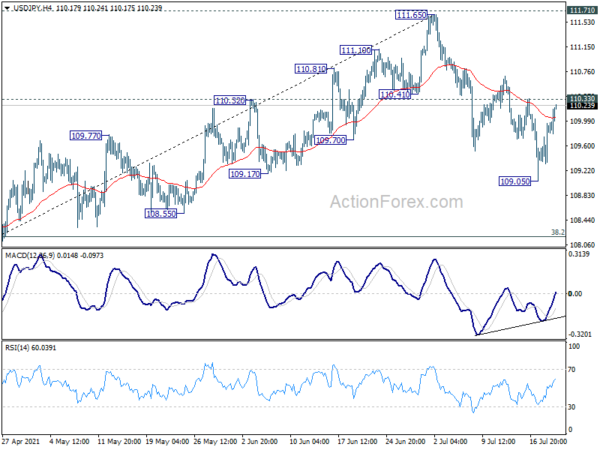 Overall, the medium term outlook remains neutral with resistance at 111.71 intact. Sustained trading below the 55 day EMA would support the 101.18 configuration to start another lower leg, which could revert to the support at 102.58 and below. For now, the outlook will not turn bullish as long as 111.71 resistance is held, even with a strong rebound. 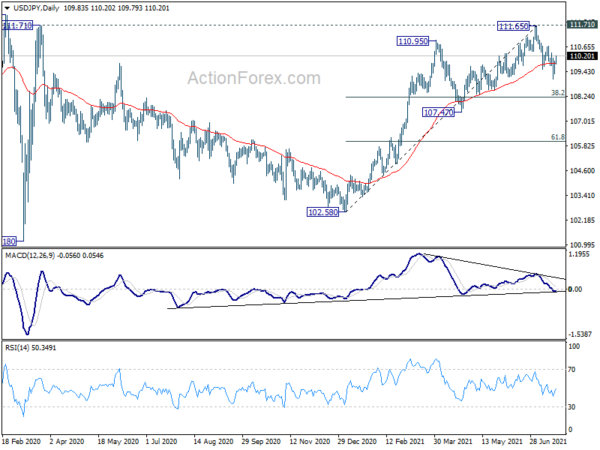 Towards a European legal framework for the ...